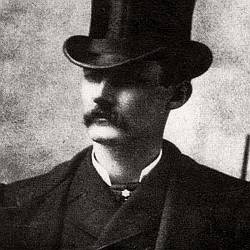 Wyatt Berry Stapp Earp was an American gambler, Pima County, Arizona Deputy Sheriff, and Deputy Town Marshal in Tombstone, Arizona, who took part in the Gunfight at the O.K. Corral during which lawmen killed three outlaw Cowboys. He is often regarded as the central figure in the shootout in Tombstone, although his brother Virgil was Tombstone City Marshal and Deputy U.S. Marshal that day, and had far more experience as a sheriff, constable, marshal, and soldier in combat. Earp lived a restless life. He was at different times in his life a constable, city policeman, county sheriff, teamster, buffalo hunter, bouncer, saloon-keeper, gambler, brothel owner, pimp, miner, and boxing referee. Earp spent his early life in Iowa. His first wife Urilla Sutherland Earp died while pregnant less than a year after they married. Within the next two years he was arrested, sued twice, escaped from jail, then was arrested three more times for "keeping and being found in a house of ill-fame". He landed in the cattle boomtown of Wichita, Kansas, where he became a deputy city marshal for one year and developed a solid reputation as a lawman. Source: Wikipedia