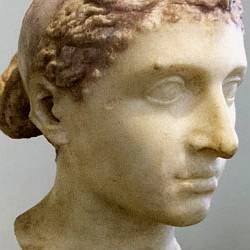 Cleopatra VII Philopator - who, being far better known than all others of that name, is known to history as Cleopatra without qualifications - was the last active pharaoh of Ancient Egypt, only shortly survived by her son, Caesarion as pharaoh. The name Cleopatra is derived from the Greek name Κλεοπάτρα which meant "she who comes from glorious father" or "glory of the father" in the feminine form, derived from κλέος "glory" combined with πατήρ "father".

Cleopatra was a member of the Ptolemaic dynasty, a family of Greek origin that ruled Egypt after Alexander the Great's death during the Hellenistic period. The Ptolemies, throughout their dynasty, spoke Greek and refused to speak Egyptian, which is the reason that Greek as well as Egyptian languages were used on official court documents such as the Rosetta Stone. By contrast, Cleopatra did learn to speak Egyptian and represented herself as the reincarnation of an Egyptian goddess, Isis.

Cleopatra originally ruled jointly with her father, Ptolemy XII Auletes, and later with her brothers, Ptolemy XIII and Ptolemy XIV, whom she married as per Egyptian custom, but eventually she became sole ruler. Source: Wikipedia