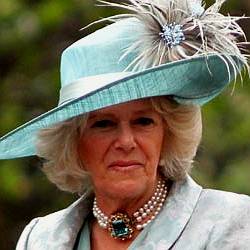 Camilla, Duchess of Cornwall GCVO CSM, is the second wife of Charles, Prince of Wales, who is the eldest child and heir apparent of Queen Elizabeth II. Instead of using the title "Princess of Wales", she is styled through her husband's secondary designations as "Duchess of Cornwall" and, in Scotland, "Duchess of Rothesay". These were adopted because of the strong association of the primary title with his first wife, Lady Diana Spencer, who was titled "Princess of Wales".

Camilla is the eldest child of Major Bruce Shand and his wife, the Honourable Rosalind Cubitt, the daughter of British aristocrat the 3rd Baron Ashcombe. She was raised in East Sussex, a county in South East England, and was educated in England, Switzerland and France. Subsequently, she worked for different firms based in central London, most notably the decorating firm Sibyl Colefax & John Fowler. In 1973, Camilla married British Army officer Andrew Parker Bowles, with whom she has two children and five grandchildren. They divorced in 1995, shortly after his retirement from the army. Source: Wikipedia