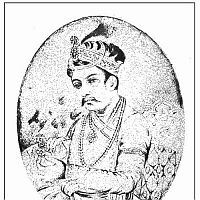 Abu'l-Fath Jalal ud-din Muhammad Akbar, known popularly as Akbar, also known as Akbar the Great or Akbar I, was Mughal Emperor from 1556 until his death. He was the third and one of the greatest rulers of the Mughal Dynasty in India. Akbar succeeded his father, Humayun, under a regent, Bairam Khan, who helped the young emperor expand and consolidate Mughal domains in India. A strong personality and a successful general, Akbar gradually enlarged the Mughal Empire to include nearly all of the Indian Subcontinent north of the Godavari river. His power and influence, however, extended over the entire country because of Mughal military, political, cultural, and economic dominance. To unify the vast Mughal state, Akbar established a centralised system of administration throughout his empire and adopted a policy of conciliating conquered rulers through marriage and diplomacy. In order to preserve peace and order in a religiously and culturally diverse empire, he adopted policies that won him the support of his non-Muslim subjects. Source: Wikipedia